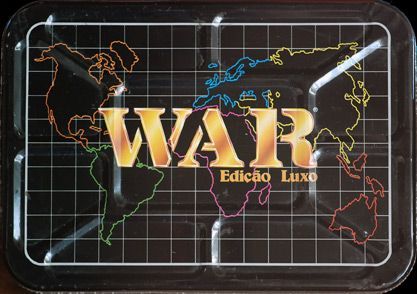 Arguably one of the most popular board games in Brazil, War is a modified version of Risk, using concepts that were later introduced to the original game, like objective cards. The players maneuver armies on a world map, trying to conquer continents, and trying to fulfill their objectives. This is the flagship game of Grow Jogos e Brinquedos and it's widely accepted as the first (and, probably, only) mainstream war game in Brazil. Players are given tons of little army units to place onto the map of the world. When it's your turn, you use your units to attack other players' positions, hopefully with superior numbers. Combat is a simple dice rolling affair that stresses attrition, and reinforcements are given to players who collect sets of cards. Re-implements: Risk (1959) Re-implemented by: War II (1981) War JÃºnior (2000) Angus: Batalhas Medievais (2004) War: ImpÃ©rio Romano (2007) War Cards (2010) War: Batalhas MitolÃ³gicas (2012) War Vikings (2017) description last edited on 2018/10/06