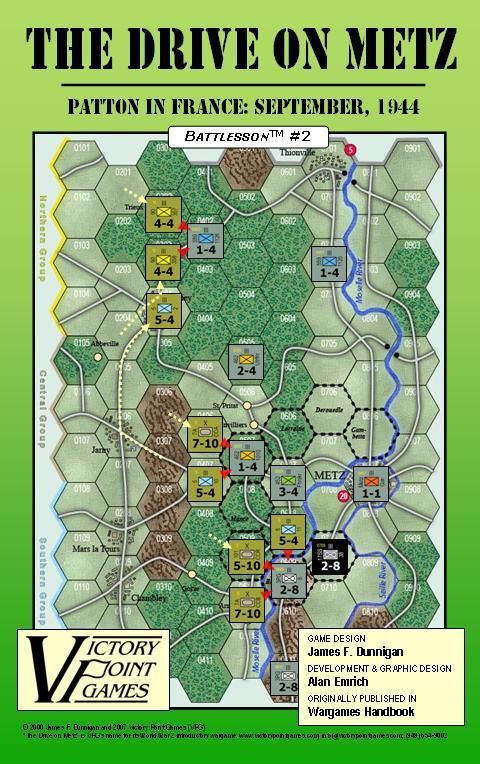 The complete game is published by Victory Point Games who, along with the designer, Jim Dunnigan, have allowed a version to be included in RBM's C3i Magazine Nr20. The designer has added new pieces and scenarios to this edition of the game. This 2-player game recreates General Patton's attempt to seize the key city of Metz and to get across the Moselle River before the retreating Germans can form an effective defense. The U.S. forces comprised of three divisions of the 20th Corps had just completed an epic pursuit across France after the Allied breakout from the Normandy beachhead. The exhausted Allied forces were at the end of their supply line and has barely enough resources left for one last push. If they had been able to get across the Moselle River, they would have compromised the entire German Westwall defenses. This would have enabled Patton to make an attempt at crossing the Rhine before the end of 1944 and might have ended the war months earlier. The defending German forces, four divisions of the 82nd Corps of the German 1st Army, were a combination of hastily collected and organized units, including fresh units from the German interior and remnants of units that Patton had been pursuing across France. The battle, which began on 7 September 1944 and lasted for about a week, was a singular opportunity that could have gone either way. Historically, the Germans won, but just barely. Scale: Each unit is 1 regiment or brigade, each hex is 4 kilometers, and each turn is 1 day. Game Components: • One 4-page, color instructions booklet • 40 color, die-cut 5/8” mounted game pieces • One 11” x 17” color game map with tables • One 4-page, color BATTLESSON (TM) booklet • Game setup illustration, optional rules, and player’s notes Reimplementation of: The Drive on Metz (first edition)