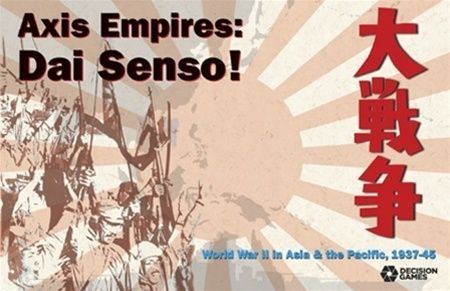 From the back of the box: Dai Senso! This game stretches from the border clashes at Marco Polo Bridge and Nomonhan to the titanic clashes at Midway, Guadalcanal and Leyte, to the firestorms of Tokyo, Hiroshima and Nagasaki and everything in between. No game tells the story of World War II in Asia and the Pacific like Dai Senso! Dai Senso! takes the playable, unpredictable and enjoyable Krieg! system used for World War II in Europe and adapts it to tell the story of Japan’s struggle from a unique perspective. Most other Pacific wargames focus on the operational aspects of the 1941-45 war. DS starts in 1937 for a true strategic experience from the beginning of World War II in Asia. As the leader of Imperial Japan seeking complete domination ("hakko ichiu"), will you strike at China, Russia, the British Empire or the United States? Whichever way you choose, you must eventually face the grim struggle of total war. All of these options are literally in the cards that form the strategies of the three factions -- Axis, Soviet Allies and Western Allies. Best of all, Dai Senso! can be linked with its new European companion game, Axis Empires: Totaler Krieg!, to play the joint Axis Empires scenario, an eye-opening global look at all of World War II. The fate of the world is in your hands! Dai Senso! means Total War in Japanese. In the game, play moves from Pre-War (where players mobilize their forces and engage in diplomacy) to Limited War (when open conflict begins) to Total War -- at that point, it’s all-out warfare to achieve victory!