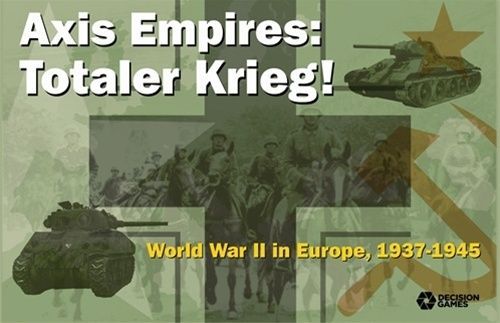 From the back of the game box: Totaler Krieg! This game stretches from the fjords of Narvik to the sands at El Alamein, from the gates of Moscow to the sandy beaches of Normandy, from the Spanish Civil War to the last days in Berlin and everything in between. No game tells the story of World War II in Europe like Totaler Krieg! This new edition of our popular Krieg! game is still the same highly playable, unpredictable and enjoyable experience it always has been. What’s new is a design and graphic update and expansion to give you more options -- especially if you want to explore the critical pre-war period from 1937 to 1939. What if the Republicans had won the Spanish Civil War? What if Germany and Russia hadn’t signed their Non-Aggression Pact? What if France had modernized its army instead of building the Maginot Line? All of these options are literally in the cards that form the strategies of the three factions -- Axis, Soviet Allies, and Western Allies. Best of all, Totaler Krieg! can be linked with its new Pacific companion game, Axis Empires: Dai Senso!, to play the joint Axis Empires scenario, an eye-opening global look at all of World War II. The fate of the world is in your hands! Totaler Krieg means Total War in German. In the game, play moves from Pre-War (where players mobilize their forces and engage in diplomacy) to Limited War (when open conflict begins) to Total War -- at that point, it’s all-out warfare to achieve victory! Includes: Two 22 x 34 inch maps 840 counters on three countersheets 200 cards A 64-page rulebook A 24-page scenario book Play aids and force pool displays