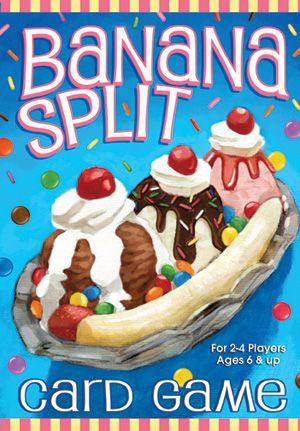 In Banana Split, you want to complete as many ice cream orders as can, especially the valuable banana splits! To set up the game, shuffle the ice cream order deck, then reveal four cards. Shuffle the ingredient deck, and deal each player five cards, which they place behind their screens. On a turn, a player can: Draw one card from the ingredient deck. Take one ice cream order and play ingredients on it. Add one or more ingredient cards to an order already in front of you. When you play ingredients on an order, you must play exactly as many as are on the card and in the order listed, from top to bottom. When you play the final ingredient on an order, place that card aside as you'll score its point value at the end of the game. Banana split orders can't be built upon turn by turn, but must be claimed all in one go, either by playing all four ingredients at the same time or discarding one wild card ingredient. Special ingredient cards let you steal an ice cream order in progress or take an extra turn. Once all the ice cream orders have been fulfilled, players tally their scores to see who wins.