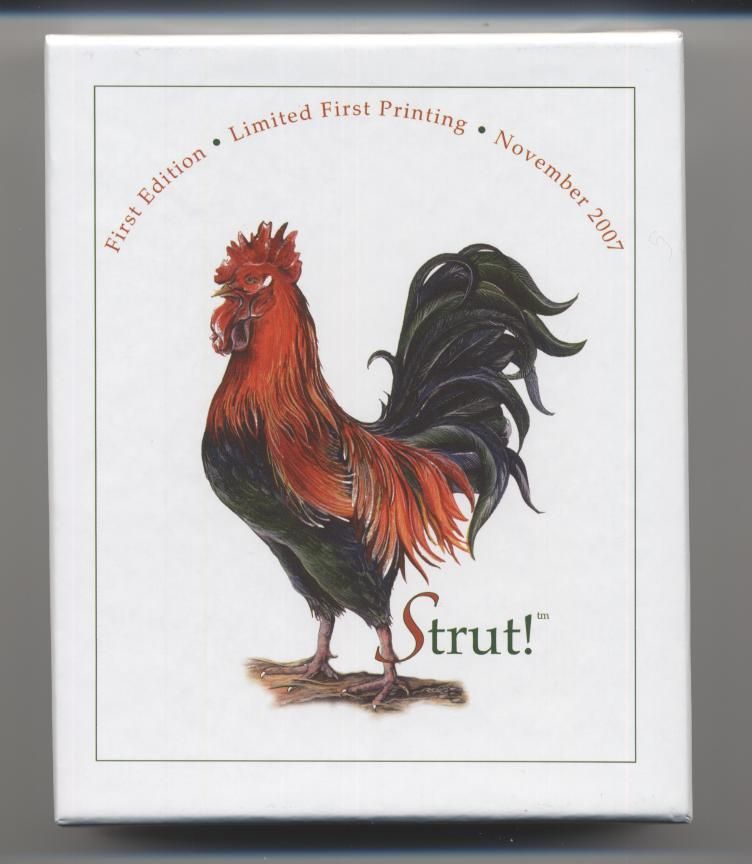 The object is to win the game by ridding yourself of all cards in your hand before your opponent[s]. Game Summary Decide on a scorekeeper. Once the cards have been shuffled, the scorekeeper deals 3 cards face down to each player, along with an equal number of white dice, called a stash. The scorekeeper places the remaining cards face down off to one side of the table to form a deck. The scorekeeper begins the game by rolling two dice (1 black & 1 white) in the center of the table. If no one scores, play rotates clockwise to the next player who rolls two dice. Any two die, including the black die can be rolled (see below). Before each roll players examine their cards to see what dice combinations will be needed to match a card in their hand. Two white dice from your stash, or. One die from your stash, and one (previously rolled) die from the table, or Two (previously rolled) dice from the table. Player’s take turns rolling until someone shouts STRUT! indicating a player believes they have won the round. A round is won when you match a card in your hand with a dice combination on the table. Let’s say you have a 4 of a Kind (card) in your hand. There are 8 dice on the table 1,3,4,6 and four 5’s: 5, 5, 5. You quickly shout Strut! believing your dice combination (four 5’s) matches the card (4 of a Kind) in your hand, thus winning the round. But have you? You have if one of your 5’s is the black die. The black die must always be part of the score. Keeping score is very simple. All dice on the table are scored. The black die counts face value [1]=1 point, [2]= 2 points [3]=3 points, etc. White dice count 1 point each. In the example above, you scored a total of 12 points (5 points for the black die and 7 points for the white dice.) After each round the winner’s points are totaled by the scorekeeper. After the scorekeeper has recorded the points, the winner discards his/her winning card, placing it “face up” under the deck. If the winner’s accumulated score totals less than 30 points then he/she must draw one new card from the deck. If the winner has accumulated 30 or more points, no card is drawn allowing that player to begin ridding his/her hand of cards in an attempt to win the game. (Re-Action cards are an exception to the “30 points” rule.) All other players keep their cards. Dice on the table are evenly redistributed. Note: As you will see as the game progresses, tactics and strategies become a big part of each round. The winner begins the next round by rolling 1 black and 1 white die. Play continues until someone shouts Strut! The first player to accumulate 30 or more points with no cards remaining in their hand wins the game. The Black Rooster If an opponent throws the Black Rooster card down on your winning card, it spells disaster! You must turn in all the cards in your hand, and draw 3 replacements. Plus, you lose all your accumulated points.