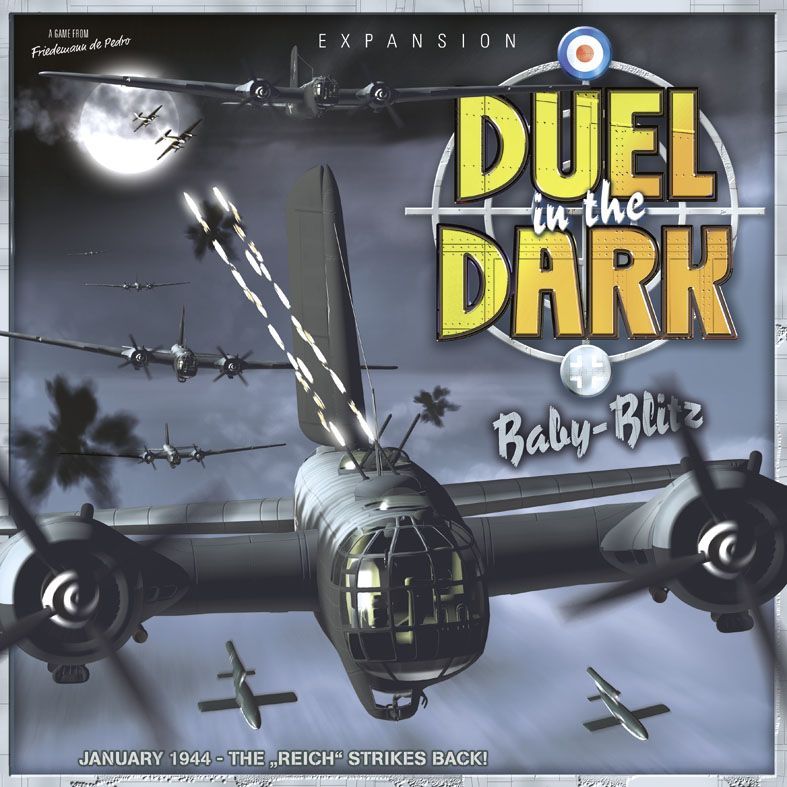 This expansion for Duel in the Dark is set in 1944 and enhances the German forces by giving them longer range attack capability, as well as a Mosquito killer. The British receive an additional Mosquito. From the publisher's website: By late 1943, the fortunes of war had turned decidedly against Germany. Besieged and in retreat on all fronts and faced with the inevitable invasion from the Western Allies, the Luftwaffe was ordered to re-launch bombing operations against England. Scraping together the few remaining assets in France, to include the new He177 “Greif” (Griffon),operations began against London in January 1944. At the same time, RAF Bomber Command has been steadily increasing its nightly attacks on German cities. The successful continued bombing of Hamburg (“The Battle of Hamburg”) has led to a sustained bombing campaign over Berlin. As the chief of RAF Bomber Command, can you continue to pound the German cities, thus halting war production and driving the German population to its knees? As commander of the German Nachtjagd, will the new bombing campaign which includes the V1, the first of many new “wonder weapons” turn the tide of the war? The decisions are yours to make in “Baby Blitz”! The new Elements of "Baby-Blitz": • The Game-Board of West-England • V1 "the flying-Bomb" • He 177 Bomber • He 219 "Mosquito-Killer" • brit. Ground-Radar • 2. brit. Bomberstream • 2. brit. Mosquito • incl. programmable Start-Time-Points for V-1 and He-177 Expands: Duel in the Dark Expanded by: Duel in the Dark: V1-Bunker