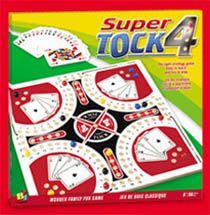 Tock is a board game, similar to Pachisi, in which players race their four tokens around the game board from start to finish—the objective being to be the first to take all of one's tokens "home". Instead of rolling the dice to the determined movement, players are dealt cards to use for movement. Players take turns playing cards, with the value of the card determining how far they may move a pawn. Certain cards have special possibilities (a King or an Ace may be played to get a new pawn into play, while a four moves you back instead of forward). If more than two players a playing, they can play in teams. When you have brought all your own pawns to your safety zone, you must move your partner's pawns.