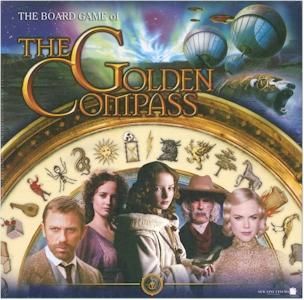 Disambiguation: This game is for the Golden Compass movie, the game for the book is located over here. Players are part of Philip Pullman’s creation, as portrayed in the motion picture: a world very much like our own, but existing in a parallel universe. The game features graphics and pictures taken from the movie. Players alternate in leading Lyra in her journey to rescue her friends, as she escapes from the Magisterium's clutches. As each turn unfolds, players collect items and clues, and help Lyra to understand the Alethiometer - the truth-measuring Golden Compass. During a turn a player uses the Alethiometer spindle: the spinning action reveals the two actions the player is allowed to choose from. A typical move involves playing or drawing Lyra cards, played in sets to collect Item tiles from the board (representing Lyra and Pan's actions and investigations) or placing Symbol tokens that will later let a player draw valuable Truth tokens (representing the interpretation of the Alethiometer). Character cards, showing the main heroes and villains of the story, can be used by players to alter the gameplay by applying their special abilities. The winner is the player that scores the most points by the end of the game.