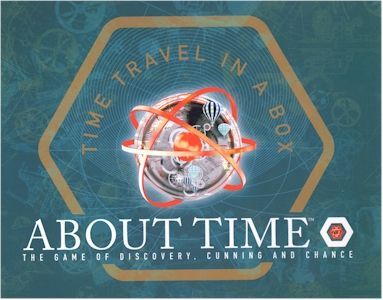 Teams compete to guess closest to the year of a historic event, which is read out from a Question Card. Winning teams collect tokens and roll the dice to move around the board in a race to the Center. The game includes a board, eight different characters to represent the teams playing, a sandglass timer, two dice, a scoresheet, six pencils, a novel magnetic category selection unit, question/answer cards, timecards, rules, and a mini-reference sheet. The game is played in rounds, the first of which is similar to a round of trivial pursuit. The second round introduces timecards, which tweaks gameplay by giving teams various powers, such as stealing points. The game sequence also changes to shake things up a bit. Very much like an exciting Trivial Pursuit, adding various new mechanics. Released at Spiel 2007.