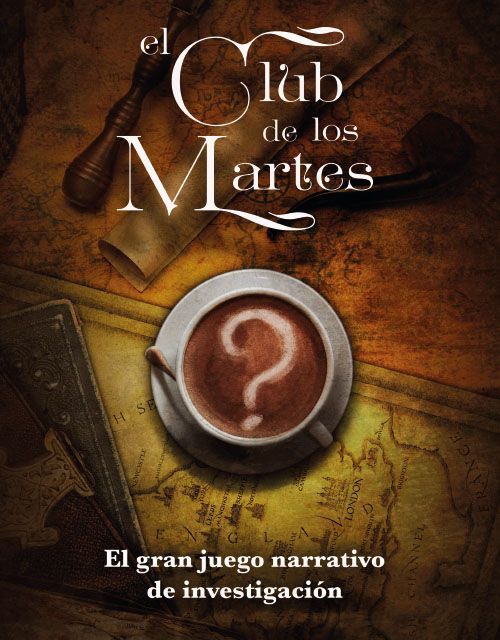 The Tuesday Club Murders (El Club de los Martes) is formed when the host, is entertaining friends and they decide that each should tell a story of a mystery, without revealing the answer, so that the others can try to guess the outcome. It is felt that with their combined skills and variety of individual experience, they will be able to solve the problems presented. The players try to reconstruct the crime by asking, guessing and fiddling about. ======= How would it be if we formed a Club? What is today ? Tuesday? We will call it The Tuesday Night Club. It is to meet every week, and each member in turn has to propound a problem. Some mystery of which they have personal knowledge, and to which, of course, they know the answer. Let me see, how many are we? One, two, three, four, five. We ought really to be six... (Joyce Lempriére) From this conversation in Agatha Christie’s book ‘The Tuesday Club Murders’, a series of great detective stories come up, where perceptive characters rival Miss Marple, who teachs them a real lesson of shrewdness, explaining with talent and with all kind of misteries, no matter how strange or complicated they may be. This game is exactly that: a narrative game based on the classic detective stories. A group of five players cooperate and compete to solve a mistery proposed by a sixth player, known as the host, trying to emulate Sherlock Holmes himself, from Arthur Conan Doyle’s books. Host and players find themselves entwined in a complicated game of cat and mouse, where the first one propose a mysterious enigma and the others must solve it by racking their brains. For a length of an hour, as that is the time limit to solve the mistery, an intense (intellectual) battle is fought, where the host challenges the rest of the members of the Tuesday Club to find a solution that almost never is near or within reach. The armchair detectives will have to use in a creative way the clichés with which their dramatic characters have been defined, and they will have to make the appropriate questions in order to find the solution. Therefore, this is a game that puts the perceptiveness, intuition, and above all the logical and deductive intelligence of the participants to test. The constant interactivity among the players, the creation of intelligent questions with shrewdness, wit and creativity, and the dynamism of the intrigue make ‘El Club de los Martes’ a perfect game to spend an hour of fun with family or friends. El Club de los Martes is many games in one. ======= A narrative game of deduction and logic. All players are armchair detectives meeting every Tuesday to engage on some crime solving. A host presents the case and in turns each player can ask questions and use his or her special abilities to gather more information. Asking questions and gathering information cost money -every player starts the game with 15 pounds - paid to a common pool. Proposing a solution is very expensive and other players may benefit economically from you failures. Only one player may win, but the solution relies on the information gathered by the whole group with certain cooperatives aspects. If no detective solves the crime after one hour, nobody wins. The player with the “first player” token has the advantage because she starts every round; but if that player passes, she loses the token that goes to the next player. Based in novel "The Tuesday Club Murders" by Agatha Christie. Rules one are available in Spanish language.