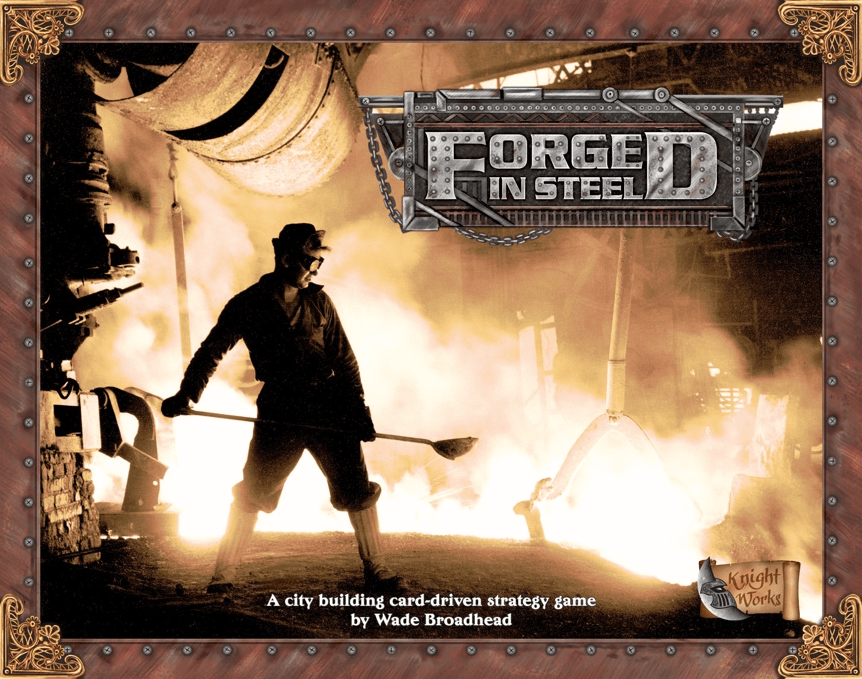 In the multiplayer card-driven, city-building strategy game Forged in Steel, players take on the role of a prominent family in a burgeoning Colorado county in 1900 as turbulent social and technological changes are about to reshape the way all Americans live. Each family seeks to control one of four sectors (mining, industry, city, or commercial) while also striving to be Mayor to control the appointment of other players to offices. The game takes place over three eras (turns/decades), each with multiple phases in which players are dealt eight cards — all with historic black-and-white photos from Colorado — and must discard one and bank two for their final turn. Cards are used to either play Municipal Muscle points to build, buy, or seize structures, or used for the "event" listed on every card. Cards can also be used to set yearly "Headlines" or "Themes" which evoke a movement in American society or technology and change VP awards or other variables in the game. Structures are scored by multiplying the amount the sector tracks have advanced by the number of buildings owned. Different tracks progress differently. Finally, players can build parks, civic buildings, hospitals, and police stations. These buildings in turn affect further play and cause neighborhoods to have more political votes at turn's end, increase VPs for proximity, or protect against certain negative cards. Forged in Steel is an organic building game in that all builds change the landscape and players may build only adjacent to where others have built "the grid/network". At turn's end, the game decides how many immigrants come seeking jobs based on how many factories and commercial buildings were built that turn. Too many? Unrest grows and there could be a riot, undermining all of your recent city-building efforts. The National Guard will step in to help you, of course, but they are usually outnumbered, and there's often fighting in the streets, so be wary of not contributing to the "Unrest Track". Can your family negotiate the turbulent changes of the early 1900s and become the local political and economic powerhouse? From the New Deal, Women's Suffrage, City Beautiful and Spanish Flu, to sidewalks and paved streets, all aspects of a 1900s western American city are incorporated, and players will learn about the rise of those developments that changed cities, labor, industry, and society forever.