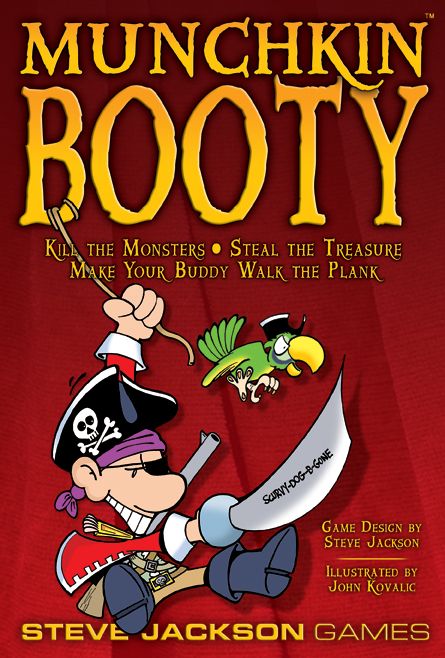 Sail the Seven Seas. Plunder the treasure. Make your crew walk the plank. Munchkin Booty brings the greatest gold-grabbers in history – pirates! – to the world of Munchkin. Use your Silver Long Johns to beat the Lobster Mobster, drink your Demon Rum to fight off the Viking Kittens, and defend yourself with the Cutlass (or Cutlad, for the gents) against the Prince of Whales. But watch out for Sharks! Plunder the seven seas as a Pirate, Naval Officer, or Merchant. Taunt your foes with your horrible Accent: British, Spanish, Dutch, or French. Equip your Half-Galleon with a Crow's Nest and Figurehead. But above all...level up! Munchkin Booty is a standalone card game that's compatible with the original Munchkin and other titles in the same universe of games. Part of the Munchkin series. Munchkin is a satirical card game based on the clichés and oddities of Dungeons and Dragons and other role-playing games. Each player starts at level 1 and the winner is the first player to reach level 10. Players can acquire familiar D&D style character classes during the game which determine to some extent the cards they can play. There are two types of cards - treasure and encounters. Each turn the current players 'kicks down the door' - drawing an encounter card from the deck. Usually this will involve battling a monster. Monsters have their own levels and players must try and overcome it using the levels, weapons and powers they have acquired during the game or run away. Other players can chose to help the player or hinder by adding extra monsters to the encounter. Defeating a monster will usually result in drawing treasure cards and acquiring levels. Being defeated by a monster results in "bad stuff" which usually involves losing levels and treasure. Note: The 2012 edition of Munchkin Booty from Pegasus Spiele includes the first expansion, Munchkin Booty 2: Jump the Shark.