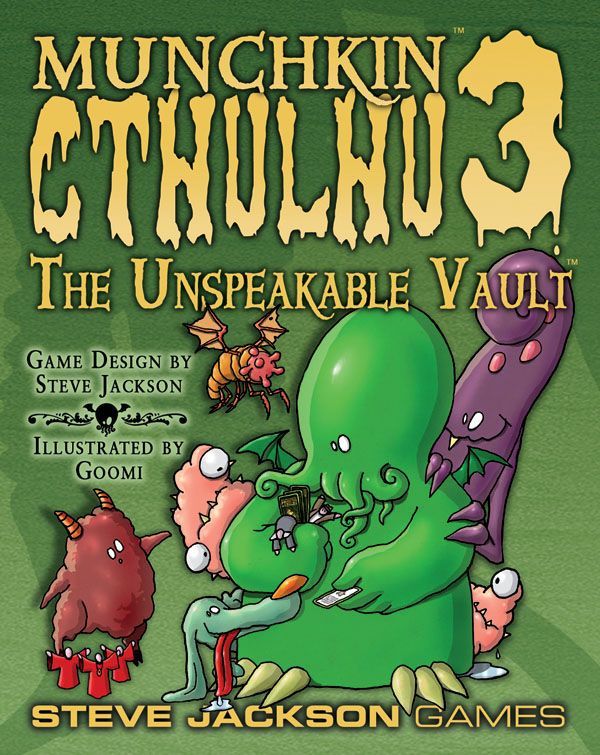 Publisher's Description Kick open the Unspeakable Vault! For years, Goomi has been unleashing his own vision of Cthulhu upon the world, in his comic "The Unspeakable Vault (of Doom)! Now his unique take on the Elder Gods comes to Munchkin, in the form of Munchkin Cthulhu 3 - The Unspeakable Vault. This 56-card expansion brings Great Cthulhoo, Dagoon, Narly, and Tindaloo into the pun-filled world of Munchkin. Feed your friends to Cthulhoo, grow Footicles, and use your Inhuman Moan to defeatthe Teeny Weeny Mi-Goo. What darkness lurks in the Vault? More Madness! Fear books (logical enough, given the number of tomes that can eat your face), ichor, even phobias themselves! More Monsters! Face Goomi's versions of the Mythos gods and creatures... Ygo, 'Zathoth, Nightgaunts, Ghouls, Deepoines, and many more! More Things That Put The Hurt On Monsters! Wield the Roman Candle, the giant Hypodermic Needle, and the... Can Opener? Sure, why not? After all, this is Munchkin! The Unspeakable Vault - more "yum yum" for your Munchkin Cthulhu game. Other Part of the Munchkin series This game is also included in the Pegasus Spiele Edition of Munchkin Cthulhu 2 (in German).