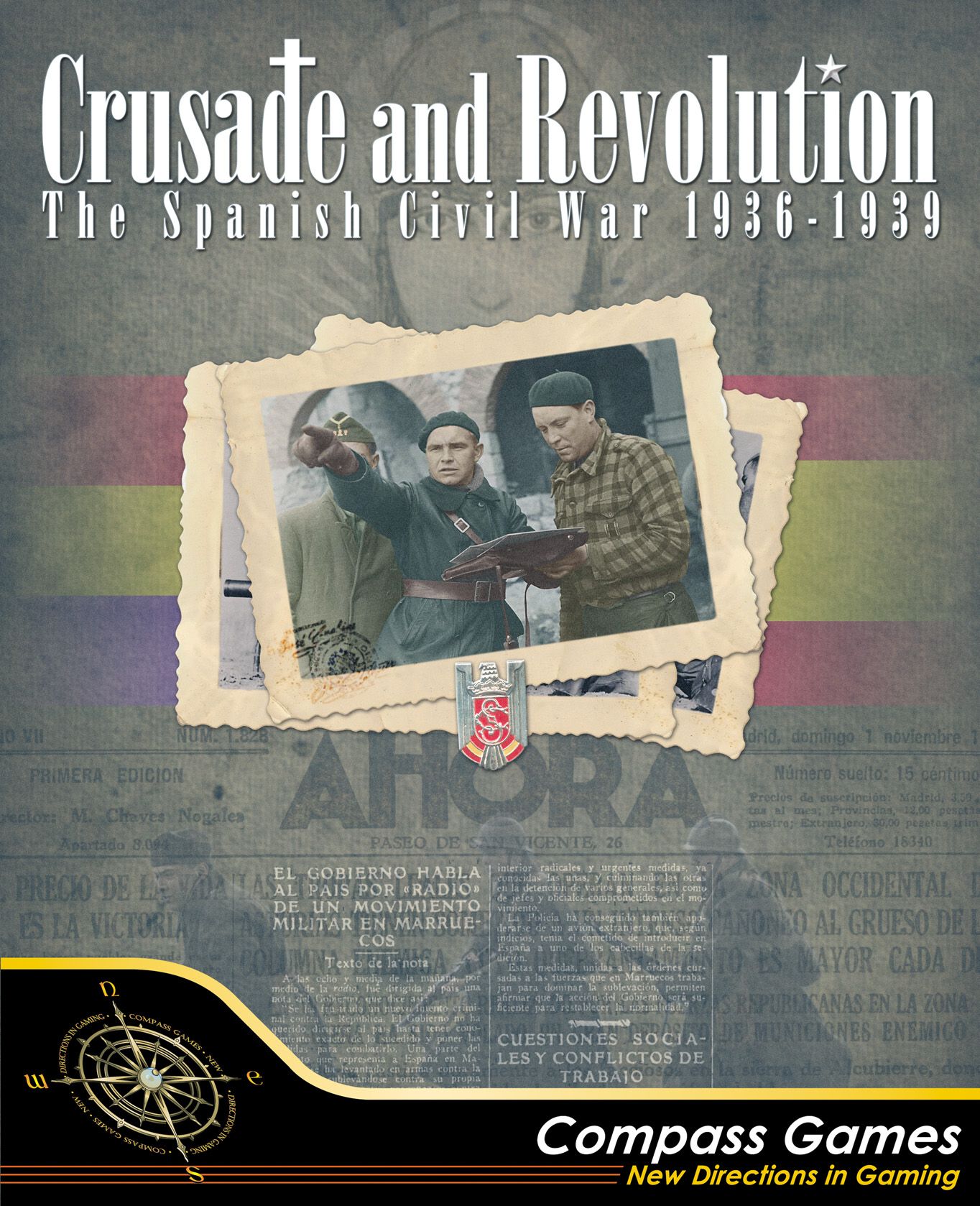 (from the designer:) "CRUSADE AND REVOLUTION: The Spanish Civil War, 1936-1939" (C&R) is a card-driven point-to-point movement strategic-operational wargame that covers all the Spanish Civil War (1936-1939). Its rules are based on Ted Raicer’s "Paths of Glory". Each player takes command of one of the sides (Nationalist or Republican), and looks after all the aspects that involve a war: mobilization, recruitment, movement of troops, offensives, construction of defences… There are also historical events that must be taken into consideration, as the foreign military aid, international policy, change of Republican Government, etc. [en Español:] "CRUZADA Y REVOLUCIÓN. La Guerra Civil Española, 1936-1939" (CyR) es un juego de guerra (wargame) a nivel estratégico-operacional con cartas y movimiento por zonas que simula la Guerra Civil Española (1936-1939). Sus reglas se basan en "Paths of Glory" de Ted Raicer. Cada jugador se pone al frente de uno de los dos bandos (Nacional o Republicano), y atiende todos los aspectos que implican una guerra: movilización, reclutamiento, movimiento de tropas, ofensivas, construcción de defensas… También hay eventos históricos que se deben tener en cuenta, como la ayuda militar extranjera, política internacional, cambio del gobierno republicano, etc. (from Compass Games website:) Crusade and Revolution (C&R) pulls together enjoyment, playability and historical simulation. It uses the traditional card-driven system, adapting it to the specific circumstances of the Spanish Civil War. Each player has his own deck of strategic cards, which are the heart of the game, and must make difficult choices on their use through-out the game. Each card has four possible uses, but only one of them can be chosen each time the card is played! The possibilities are: Recreate a Historical Event: Each card shows a historical event that affected the course of the war. They include political, military, economic and even social events, as well as the reinforcements that flowed to both sides through-out the war both from within Spain, and from foreign powers Germany, Italy and Russia. Conduct Operations: Each card has an operations value that is used for activating units on the game map for movement, preparing fortifications, or attacking. Strategic Redeployment (SR) of Troops: Each card has a Strategic Redeployment value that is used to move units great distances on the game map, or to bring units out of Reserve to shore up a threatened flank. Replacement Points for Reforming Your Army: Each card has a Replacement Point value which is recorded and used for repairing damaged or rebuilding destroyed units at the end of the turn. The greater impact the historical event of a card has on the game, the greater its Operations, SR and Replacements value. As such, a player is often faced with a dilemma while playing each card: use an important event, launch an offensive in a vulnerable zone, move units from one front to other, or accumulate replacements to recover from losses? Combine this with "Combat cards" that bring tactical benefits, and a player faces has a myriad of choices with each and every card. A complete C&R game is divided into three phases, which illustrate the evolution of the Spanish Civil War and introduce new strategic cards: The War of the Columns phase begins with the outbreak of war and finishes in February 1937. During this phase only “small units” are used, because both sides had limited combatants, almost all grouped in irregular units - called “columns”- that operated across large, poorly garrisoned fronts. The best of these “small units” are the Nationalist African Army regular army units – brought to the Spanish mainland from Morocco by Franco at the outbreak of the war. These units are strong, but brittle, as they cannot be replaced or replenished with Replacement Points. The Mobilization phase lasts from March 1937 to February 1938. During this period the two sides realized that the war would not be over quickly, and began to mobilize their human and material resources to form regular armies. The players deploy their first “large units” (army corps) and large battles erupt across Spain. The War of the Armies phase begins in March 1938 and lasts until the end of the war, in April 1939. During this time, the Nationalists tried to force the enemy’s unconditional surrender, while the Republic fought desperately to resist and prolong the Spanish Civil War so that it might merge with the threatening Second World War, which could be seen looming in the horizon. Take command of your forces! Marshall international aid and intervention to your side! But take care...for your opponent is doing the same, and while you may be planning on achieving a quick victory, you never know what a game of Crusade and Revolution may bring! Time Scale: 1 turn = Two months (1 month during the first 4 turns of the game) Map Scale: 1 space = approximately 60 kilometres (37 miles) Unit Scale: (Small Units) from Irregular columns to divisions. (Large Units) From reinforced divisions to army corps. Players: 2 Playing Time: Small Scenarios: 3-4 hours, Full Campaign: 8+ hours Components: One 22" by 34" map 110 Strategy Cards 176 5/8" diecut counters 280 1/2" diecut counters One Rulebook One Playbook Four Player Aid Cards Two six-sided dice Designer: David Gómez Relloso Developer: Kevin Bernatz Artist: Nicolás Eskubi Ugalde