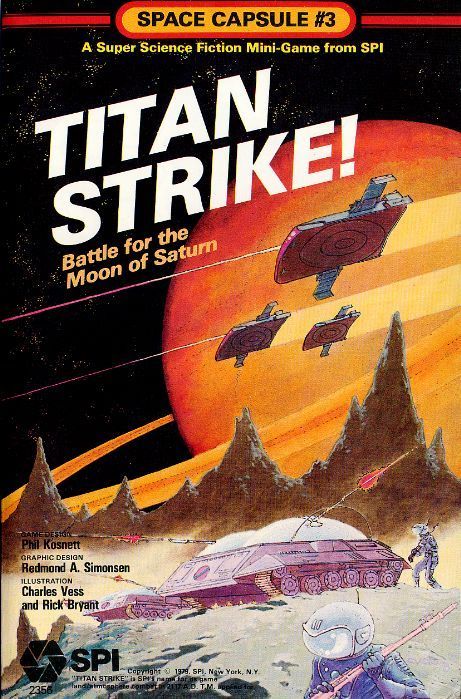 The Martian Rebellion of 2093 had frayed the economic fabric of the entire Solar System. As the USA and USSR gambled on the development of interstellar colonization, the European Economic Community and the Hegemony of Eastern Asia surveyed the Outer System. Most important among the new colonies was Titan; the largest moon of Saturn, beneath whose barren surface lay the salvation of civilization - fissionable materials sufficient to feed Earth's hungry reactors. Cooperation marked the early efforts of the two colonizing powers, but by 2117 - twelve years after the first fissionable strike - economic and territorial disputes precipitated war. Titan Strike! Simulates the struggle between the EEC and the HEA in deep space and on Titan itself. Futuristic infantry teams on hover platforms, Titan environmental Combat Vehicles, drone robot tanks, and jet-powered hoppers clash in an all-out effort to secure Titan's ultimate treasure - energy sufficient to sustain Earth's crowded billions for a century