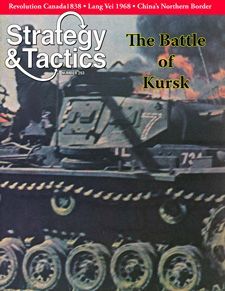 (from the rulebook :) This design is actually the third edition of the "Kursk" game originally published by old-SPI back in the early 1970s, which was later redesigned into a second edition, retitled as: Eric Goldberg's Kursk: History's Greatest Tank Battle, July 1943. The first edition of the game used the proto-system originally devised by James F. Dunnigan for the France 1940 title he published early on in S&T. This new edition is by Ty Bomba, and shares an evolution of the system used in our other Road to Ruin titles: Drive on Stalingrad, and Drive on Moscow. For each of their player turns, both players determine the phase sequence their own forces will use. That is, they may choose to have their movement phase first, followed by their combat phase; or they may chose to fight first, then move; or they may choose to have two movement phases; or they may choose to have two combat phases.