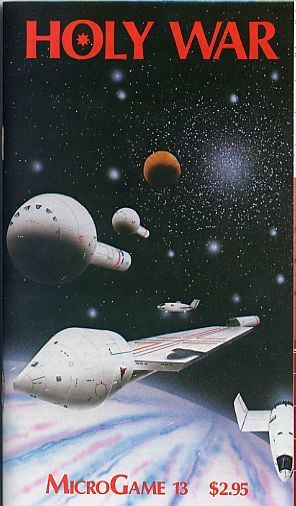 Microgame #13 in the Metagaming Microgames series. Amtik the god had a problem. The universe was internal to his 400,000km long self. He was "god" to the universes' inhabitants. Unfortunately, only the Holy Band truly believed in and worshipped Amtik. The unruly Sunthrowers believed in Amtik's existence, however, they also believed that "life was not an end, but a by-product of systems design". Amtik was in danger! The Sunthrowers were hurling stars at his universe sensor ducts. The Holy Band wanted his divine intervention. A sun in the ducts would dissipate poor Amtik and free his creations. While the Holy Band mightily struggled to believe and triumph, Amtik might even get bored and "turn-off" his universe - is a puzzlement. Holy War is a two player strategic game of "religious" war. Ship types include Rangers, Probes, Warp Line Generators, Luck Ships, Star Busters, Jammerswarms, Pressorships, Psycheship, Emissary of Prayerships and more conventional combat types. HOLY WAR is by the designer of GODSFIRE and has similarities to that game.