The Eye of Judgment - Universal Statistics 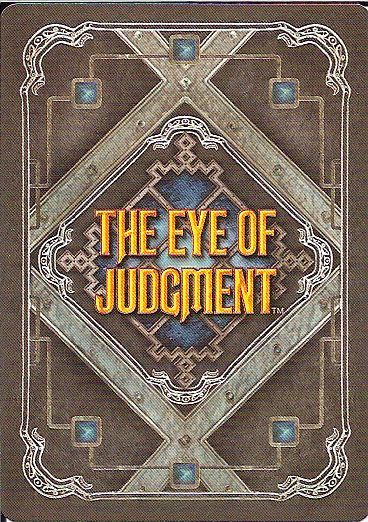 The Eye of Judgment is a hybrid paper and electronic collectible card game which can be played using the PlayStation 3 game console, supported by the PlayStation Eye camera peripheral. It is one of the first games to use the peripheral, which is bundled with the game, along with a fixed Starter Deck and 1 booster pack. The trading cards are encrypted along their edges with a CyberCode matrix code. The game can also be played without the use of the Playstation 3 system, as a stand-alone card game. Players take turns playing creatures or spell cards from a 30-card deck in order to control a majority (5 fields) of the 9 total fields on the playing mat which is laid out in a 3x3 grid. Other than controlling a majority of fields, players can also win if their opponent runs out of cards to play. Creatures' overall effectiveness is determined by their Hit Points and Attack Score as well as any special abilities they may possess. Five elements divide the game's units: Water, Fire, Earth, Wood, and Biolith. The playing grid fields have a top and bottom side and each side is affiliated with one of the five elements. Creatures placed on friendly elements receive HP bonuses while creatures placed on an opposite element (a Fire creature placed on a Water field) suffer a loss of Hit Points, so unit placement is important. In order to play any card (creature or spell), players must first pay a card's required summoning cost in mana (auto-generated for players every turn). Each creature has a specific attack and defense pattern and these, along with the unit's placement on the 3x3 grid, determine where combat occurs and to some extent, how it resolves. The extremely unique aspect of the Eye of Judgment game, however, is that when you play a card, the PlayStation Eye peripheral automatically generates that creature or spell into a 3D graphical version on your TV or monitor and it places it on a computerized version of the playing grid. It also generates battle animations and resolutions digitally based on the cards involved or recently played. This adds a level of visceral excitement to the collectible card game experience since you can actually see your minions battling it out in colorful digital fashion. There isn't a single-player campaign but players can play matches vs. an AI opponent, another human, or online vs. other human opponents. A rudimentary creature combat mode entitled Judgment allows players to determine which units would defeat other specific units in a head-to-head match-up. The Eye of Judgment provides 5 themed pre-constructed decks (Fire Crusader, Earth Emperor, Water Barrage, Wood Swarm, and Biolith Scourge) and the Starter deck that's provided with the base game (containing a variety of card types). Set 2 is due for release sometime in mid-April 2008 and will add another 100+ cards to the game, with more advanced powers.