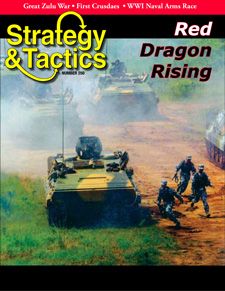 Red Dragon Rising: The Coming War With China (RDR), is a strategic-level investigation, with operational undertones, of the possibilities inherent in the first 30-or-so days of a hypothetical war between the Peoples Republic of China and a US-led counter-alliance. The time frame is the not-too-distant future, roughly between now and the end of 2014. On the Chinese side, the viewpoint of the player is that of Peking's top-rung national leadership. On the US side, the opposing player represents the top-rung military commander in the Western Pacific theater. The game is easily adaptable for solitaire play. The system – given we're dealing with events that haven't happened and therefore can't be studied in detail after the fact – has been crafted to present the war as a unitary vision rather than a strictly sequenced process. The action can alternately telescope or expand, sometimes moving ahead in whip snake lunges, at other times decelerating to dream-like slow motion. The system is more quantum mechanics than Newtonian, more Escher than Rockwell. Its presents a time-space inter-flow that can only be grasped in totality by the human mind once play is over and the entire war can be looked back on and chronicled in a reconstructed linear fashion (much like day-to-day reality). Three initial assumptions are as follows. First, the Chinese are cast – not unreasonably, we think – as the aggressors. Put in terms as politically correct as possible: they're the "revisionist power" here, the nation wanting to overturn the present-day status quo in the Western Pacific: they're conducting a strategic offensive. Second, the war inevitably starts over Taiwan, as that island is the unavoidably the first strategic block Peking must neutralize on the way to becoming East Asia's hegemon. Third, the war will not begin with a nuclear attack; though the danger of that kind of escalation may not be far off. Most ground units in the game represent brigades ("brigade combat teams" or "BCT" for the US). The exceptions are: 1) the Singaporean army is entirely represented by just one unit-counter; and 2) the Taiwanese and Philippine armies are represented by their corps components. Aircraft units are mostly represented by mixed-type combat wing formations, though only one aircraft type – the predominant one for each such wing – is shown on each counter. Long range bombers have their own mono-type units that can't combine operations with the other tactical air wings in the game. Ship units mostly represent mission-oriented groupings of vessels (Surface Action Groups). Aircraft carriers and cruise missile attack submarines each represent just one such vessel of those types. Other submarines are represented in groups called "Subrons." On the area map, each inch equals approximately 100 miles.