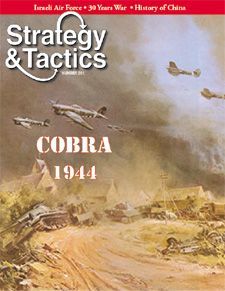 This is a two-map game, in which the action begins on D-Day, 6 June 1944, and continues through the Allied breakout and subsequent drive to the Seine River. Two one-map scenarios are also included: one covering the landings and fight to secure the beaches from 6 June to 15 July, and a second covering Patton's famed breakout operation. Units of maneuver are mostly regiments and brigades with some battalions and divisions. Randy Heller has provided a new rule with new counters added for flak units and other small German units that were important to the stubborn defense.