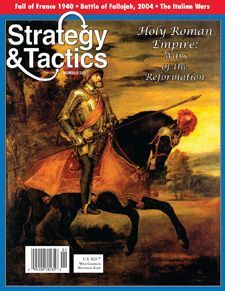 Holy Roman Empire: Wars of the Reformation, 1524-38 (HRE) is a wargame of intermediate complexity intended for play by four, three or two. The era it covers – from the Peasants Revolt to the Truce of Nice – was one that proved decisive in shaping what has since come to be known as ‘modernity.’ On one side was the Holy Roman Empire, the (theoretically) Europe-wide polity under control of the Hapsburgs. Contending against them were the Kingdom of France, the Ottoman Empire and miscellaneous minor states, as well as the rising tide of Protestantism. HRE is primarily intended to be played by four, each representing a different major power: the Hapsburgs, France, the Ottomans, and the “League” (the latter representing assorted minor power coalitions that came and went). Each player has a variety of military and political instruments with which he can attempt to gain control of Europe. The rules are written with procedures for four-player games in mind; however, games with three or two players can also be managed by using the altered framework provided for such contests.