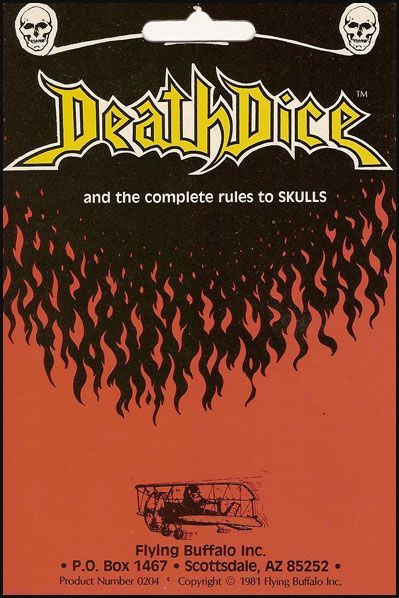 Quoted from the back of the package Copyright 1981 Flying Buffalo Inc.: Skulls A game for any number of people Required: two "Death Dice", paper and pencil This game is played in six rounds. The object is to get the highest score after six rounds. Each of the two dice has number on five of the six sides, and a skull on the sixth side. Determine which player goes first by any convenient method. First player rolls both dice. If no skulls are showing, the player adds the numbers showing to his score for the round. He he has the option of rolling again, or passing the dice to the next player. If he passes the dice, his turn is over, and the score he has rolled so far is "protected." If he rolls again, he may get more points, but he may also lose all the points he has received so far that round. A player may continue to roll the dice until he decides to pass them, or until he rolls one or more skulls. If a player rolls one skull, he loses all the points he has gained that round, and gets a score of zero for the round. He must then pass the dice to the next player. If a player rolls two skulls, he loses all the points he as gained that round, and in all previous rounds. He is completely wiped out, and must start again the next round. He must pass the dice to the next player. After all the players have had a chance to roll the dice, draw a line under the scores to signify that the scores above the line are "protected" (i.e., cannot by wiped out the the roll of a single skull). Note that each player must roll the dice at least once each round. Subsequent rounds: In the following rounds, players roll the dice in the order of their score so far. The player with the highest score at they end of the first round will roll first for the second round. The player with the second highest score will roll second, and so on. There is an advantage to rolling last, so we give that position to the player who is losing the worst. If two players are tied for score, they may roll a dice or flip a coin to determine which must roll first. At the end of six rounds the player with the highest score wins. If two players are tied for the highest score, then all players must roll another round. Hint: although the odds of rolling a skull on any one roll are always exactly the same as any other roll, the more times you roll in one round, the more points you are rising on any one roll. Flying Buffalo Inc. P.O. Box 1467 Scottsdale, AZ 85252 Product Number 0204 1981