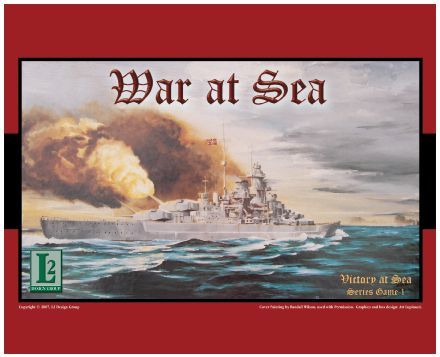 War at Sea is the classic game designed by John Edwards of Jedko Games and entrusted to L2 Design Group to reproduce this fine classic game in the custom you are used to from L2 Design Group. A naval simulation of the Second World War naval battles in the Atlantic Ocean and the Mediterranean Sea, this game has all the big battleships and carriers of the belligerent sides. True to the original game, War at Sea has a one piece die cut map on heavy board, all the classic rules and the most recent rules used in Tournament play at WBC. Counters are 5/8" x 1.25" in size and hit markers are 5/8". Orders of battle are given for the British, German, Russian, French, Italian and United States Navies. War at Sea is the first of 3 planned games, the Atlantic, the Pacific and a linking game. Counters for War at Sea have variant RAIDER backs on them, NOT used in this game, but consistent with the entire Victory at Sea system. Almost every variant counter known has been included with the counter mix including: • Frogmen • French Navy • 1 Factor Air Power • The Kirov, the Argus and more. • Force G, Gibraltar Naval Guns and English Channel mines • Admirals and more!