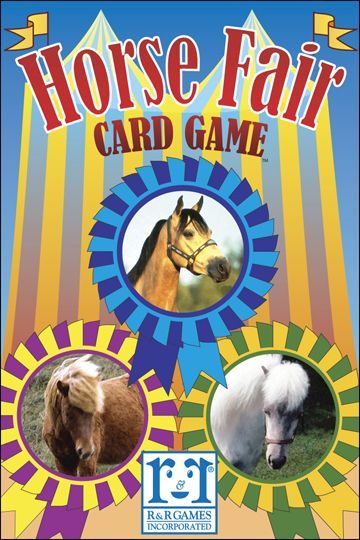 Horse Fair is a card game containing 65 cards (numbered 3-7) and 10 horse figurines. As the judges of the Horse Fair, players vote on which of the five horses they want to win the fair. On their turn, a player lays a card from their hand face-up to the table and draws a new card from the draw pile. A horse is a winner when the number of face-up cards for that horse, among all players, is equal to the number printed on that horse’s cards. All players who played the winning horse collect those cards for later scoring. The player that played the last scoring card also receives a horse figurine. All other face-up cards are discarded and a new round begins. The game ends when one player has acquired 4 horse figurines. Scoring for the basic game awards one point for each card and two points for each horse figurine a player has collected. The advanced game scoring awards the face value of scored cards and only one point for each horse figurine. The deck is balanced, containing more 7-value cards than 6-value, etc. Each horse also has a “Second Look” card which counts as two cards when laid to the table and a “Thumbs Down” card in which all cards for that are face-up for that horse are discarded. Re-implements: Trendy