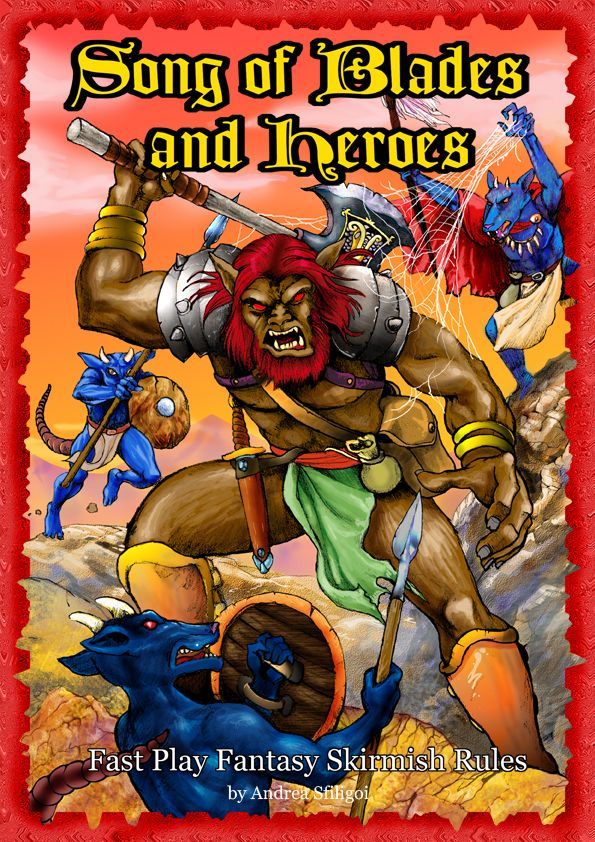 Song of Blades and Heroes is a fast-play, skirmish-level fantasy miniature system. It uses an action-point system that requires no book-keeping. The rules are designed to be simple, fast and fun so that a mini campaign of several games can be played in a single evening. The game uses only 6 sided dice and requires approximately 5-10 models per player. The rules recommend 15 mm figures on a 60x60cm play area, but can be played in other scales. There is nothing scaled in inches or centimetres, three measuring sticks to measure all distances and ranges. Alternatively the game can be played without measuring sticks on a hexgrid. The game includes statistics for 180+ monsters and heroes, and details to be able to create your own. Also there are campaign rules where your warband grows more powerful after every battle, and six basic scenarios. There are some stand-alone games based on the same system, which could also be used as expansions to the base game: Song of Arthur and Merlin (2008) - Arthurian supplement featuring sections on the historical Dark Ages king, the Welsh legendary king, and the Hollywood king. Originally an expansion, in 2011 this was re-released as a stand-alone product. Mutants and Death Ray Guns (2008) - a post-holocaust skirmish game. Song of the Splintered Lands (2009) - Sourcebook based on the Splintered Light miniatures line. Song of Drums and Shakos (2009) - a Napoleonics skirmish game. Flying Lead (2010) - a game of gang warfare to Pulp action, from military operations to black-clad assassins.