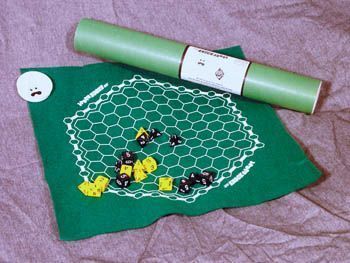 Knockabout is an abstract board game where players are trying to push the other players' pieces off the hexagonal board. The pieces are 4-, 6-, and 8-sided dice which move in a straight line as far as the number on their top face. Whenever a die gets hit by other pieces (friendly or otherwise), the last die to move as a result of the collision gets rerolled. Pieces knocked into the outer ring are eliminated from the game, but still can prevent future pieces from being knocked into the same spot. The first player to knock five out of his opponent's nine pieces into the outer ring wins. The game is mostly a mixture of attempting to maneuver ones pieces into strong positions, gently bumping them to get high numbers, and sabotaging the opponents' positions so their pieces have more limited movement.