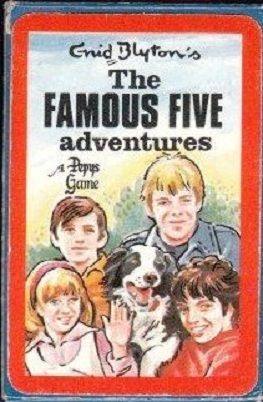 This is a children's card game based on the theme of "The Famous Five," a fictional group of English children who appear in books written by Enid Blyton. The card game is basically a rummy variation incorporating storytelling through plot lines depicted on the cards. The cards incorporate story lines from the fourth, fifth and eighth titles in the Famous Five series. The game was reissued in 1978 with new artwork on the box and cards to coincide with the appearance of a short-lived television series based on the books.