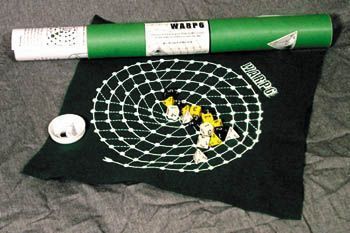 Warp 6 is a mostly abstract race game where players have a fleet of starships (which are represented 4-, 6-, and 8-sided dice) trying to go down a spiral path to the center wormhole. During a turn a player moves one of his or her ships along the the spiral exactly the number on the die. A player can choose to change the number on a die up or down by one instead of moving. The game revolves around attempting to land on other ships (friendly or otherwise) which allows sliding down at least one loop of spiral until it reaches an unoccupied spot, thus cutting out a lot of transit time. When this happens, the die is rolled before it is placed in its landing spot to receive a new number. Typically, long chains are formed which can be taken advantage of by all players. Knowing when to form, break, take advantage of, and foil the use of these chains is the key to winning. In the three-player version, the first player to get 4 of their 6 ships out wins. In the two-player version, the first player to get 6 of their 9 ships out wins. Online Play Boardspace.net (real-time, AI option)