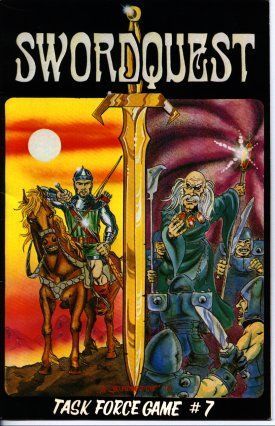 Each player will command a force consisting of leaders, guards, and magic users in his search for the lost Sword of Lumina. As players maneuver over the full color map, they will encounter monsters, enemies, spells and a Dragon than can be controlled; but will often turn on the controller! A unique tactical combat system will allow players to take on a much larger force with a good chance of winning. It is not difficult for a player to discover a sword, but once found it must be taken safely to a Citadel, and even then it may be a counterfeit! This game was originally released as a Pocket Game by Task Force Games. It was also released as a revamped 2nd Edition in a Boxed Version.