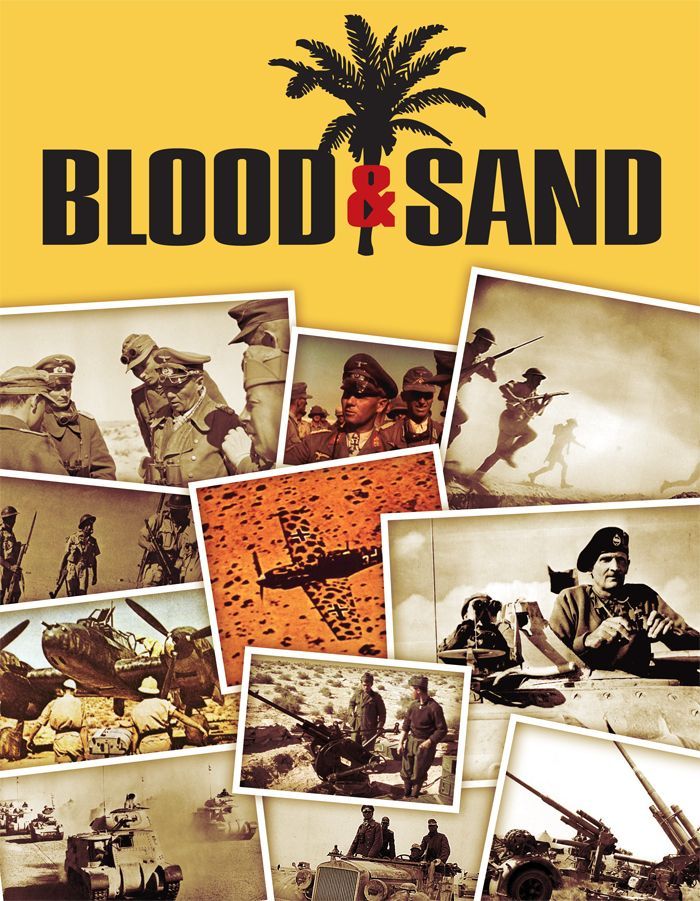 The Campaign for North Africa, 1941-42 What, another North Africa game? Yes but here is something almost completely different from any WWII Campaign game you've seen: no CRT (or any other tables), buckets o' dice, and cards all used in a totally new approach to gaming that can be learned in 5 minutes and played in a few hours. Most of the rules and mechanics for Blood & Sand will be familiar to anyone who has ever played a wargame. However, Designer Richard Berg, no stranger to this campaign, has added to this accessible simplicity a combat system that rates units for how many dice they get to roll on their behalf, as well as what kind of dice (small arms or Heavy Weapons). No CRTs, no sirree! The game also uses cards, one deck (of 27) for each player (whose cards are somewhat different from those of the other player) to enhance the game. (The cards don't "drive" the game and they can be left out, if you're so inclined.) The cards are part of a Resource system that gives the players a number of points which they can use to buy cards, rally units, build fortifications, or bring in Reinforcements. The RP choices are theirs, but there are far more choices than points. The cards, themselves, give the players "Opportunities", from using their (or negating their opponent's) tank capabilities, to getting more supplies, to special Breakthrough and Reaction movement, to forcing the Allies to Withdraw units, to the effects of Rommel and other leaders. What the Players are Saying: Here are some the reactions from the Blood & Sand play testers and rules readers: "Very simple and very easy. No one should have a problem with the rules." Adam Freitag "I would hope to use it as an introductory wargame, but I am optimistic that it would be sufficiently interesting to keep experienced wargames happy as well." Paul Marjoram "This looks like a fun game The added tension of the need to balance the use of RPs [Resource Points] for units, forts and cards is appealing - a good abstraction of the logistics concerns of the campaign." Edmund Hack "Using cards in this manner may make for some very agonizing decisions - a good thing in a game. I also think the combat system is clean and simple, yet effective." Jeff Paul The rules for Blood & Sand are only 8 pages, including rules for playing Solitaire, covering four scenarios, ranging in size (the two maps are used only in the full campaign game) and playing time Playing time for the Basic Game has averaged about 3 hours,