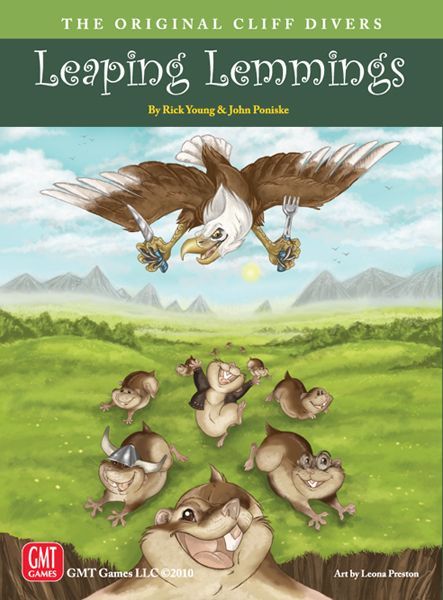 Leaping Lemmings - The Original Cliff Divers Leaping Lemmings is a humorous game for 2-6 players. Each player controls a cloned clan of lemmings that have been specially trained to compete with the other lemming clans, all trying to scurry down a canyon and hurl themselves over a cliff. Distance and style points are important. One lemming diving with style and élan is worth as many as five of the more mundane divers. But beware the hungry eagles circling overhead or your lemmings might not even make the cliff edge! Objective: The player with the most victory points wins the game. To earn victory points, players dive their lemmings over the cliff edge and/or collect Lemming Chow Pellets. The game board is a hex-based map representing the canyon down which up to six separate lemming clans will travel. The canyon ends with the cliff edge hexes, which are the lemmings' ultimate goal. Between the lemmings and their goal there are two eagles circling overhead hoping for multiple lemming snacks. Each turn a movement card is revealed which will allow for 2-5 lemming movement points. Card luck is mitigated in that all players use the same card to move that turn. Only the top lemming in each stack is allowed to move, so covering your opponents' lemmings is one tactic that is used to slow them down. The down side is that the top lemming in each stack is the only one in danger of becoming eagle chow. Special Actions allow players to briefly alter the normal rules of the game to their advantage or to their opponents' detriment. There are 16 different Special Actions in the game. Home Page: http://www.gmtgames.com/p-143-leaping-lemmings.aspx