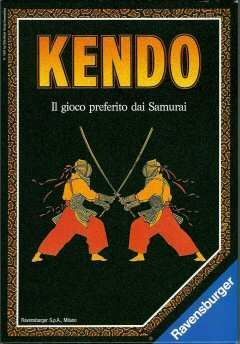 Kendo, The Samurai's Favourite Game, lets 4 Samurai fight across a hex grid to get their Prince safely into the palace at the centre. Your 8 figures are numbered 1 (Prince), 2 (Samurai) or 3 (Fighter) and may only move their number of spaces. Finishing a move on an opponent's piece is a strike and it is removed from the board. Strike a prince and the player is out of the round, though their pieces remain on the board. Get your Prince to the centre and score 5 bonus points, whilst all remaining pieces score their value. Play a few rounds and most points win. Interesting abstract game, was very popular in Germany and often reprinted. Description for Kaiser, König, Edelmann (Emperor, King, Nobleman) Each player tries to be the first to reach the castle with his prince. At the beginning of play the figures are arranged according to a certain starting order. The player, whose turn it is, moves one of his figures as many fields as it is allowed (3,2,1). If the figure moves onto a field with an opposing figure, this one is struck and taken out of the play. If it takes an opposing emperor out of the play in this way, that player is immobilized completely; his figures however remain in the game as handicaps. One may not jump over figures. Likewise it is not allowed to move through the palace or go back to the spot you came from. Additionally the player is obliged to move every turn. The emperor can move only to one crossing, the kings to two crossings and the noble men up to three crossings. The player whose emperor first arrives at the castle wins.