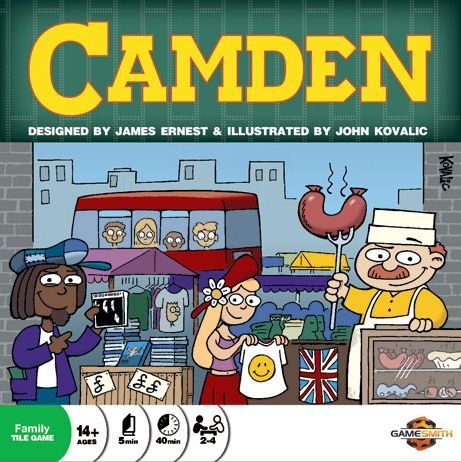 Camden is a game about drawing and laying cards (acting as tiles) to form a highly abstracted street market. What sets the game apart from other games in the tile-laying genre is that the cards can be placed almost anywhere on the board and in almost any orientation. Cards may touch at corners, and the corner of one card may touch the side of another. Players advance by purchasing stores formed by the cards and collecting revenue from those stores at the beginning of each subsequent turn. Symbols on cards may trigger effects when drawn, either destroying or emptying the largest store, or giving players bonus payouts. Victory is achieved by the first player to reach 50 points. Since revenue comes from the quality of your store, but other players can play tiles to alter that store, the overall result is a cutthroat mind-bender, making it one of the most popular games of Cheapass's Hip Pocket Games series. The game was originally released as Agora in 2002, with the theme of an ancient Greek marketplace.