Rock of the Marne - Universal Statistics 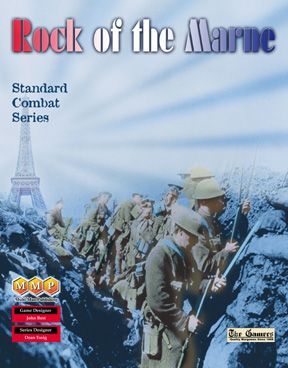 (from MMP website:) Rock of the Marne: The Second Battle of the Marne, 15 July to 25 July, 1918 covers both the final attack of the German army in July 1918, and the Allied counteroffensive that produced the battle known to Americans as the Second Battle of the Marne. The Germans believed they could launch an offensive on both sides of Reims, which would pinch out an Allied salient and draw in Allied reserves, and thus possibly produce a breakout across the Marne leading to the final drive to Paris. Despite gaining their bridgehead across the Marne, the Germans did not expect the fierce resistance offered by the Allies including the American 3rd infantry division-which earned its honorific name “Rock of the Marne” for its steadfast defense. An even bigger surprise awaited the Germans, however, when the Allies attacked them with crushing power from a wholly unforeseen direction three days later. Refusing at first to relinquish the initiative, the Germans showed why they were masters of defensive warfare in World War 1 as they exacted a fearsome toll in casualties from the attackers including the American 1st and 2nd infantry divisions. Rock of the Marne shares many of its design features with MMP’s earlier game on the 1918 battles - Operation Michael. The Germans’ striking power consists of the battle-depleted, but still dangerous, stosstruppen. Trained specifically in infiltration tactics, these hard-core infantry units can find a way to pick apart the toughest Allied defensive position. The Germans also have mobile, and deadly, machine-gun units that will wreak havoc on unwary attacking Allied units. The Allies used tanks in record numbers in their initial assault, and these are shown in the game, as well as the six big American divisions that participated including the famous 1st Infantry Div, The Big Red One, the 42nd Infantry Div, the Rainbow Division, as well at the 3rd. The air game has been significantly expanded in Rock of Marne as both sides deploy their air assets to bomb bridges, and strafe infantry. Finally, both the Allied and the German player must learn to operate within their constraints and opportunities of the WWI command and control environment, which means you may not automatically get to attack with all the units you had planned! Contents: One 22"x34" map 280 counters (1 countersheet) Series Rules Rock of the Marne Specific Rules Two Dice Part of the Standard Combat Series.