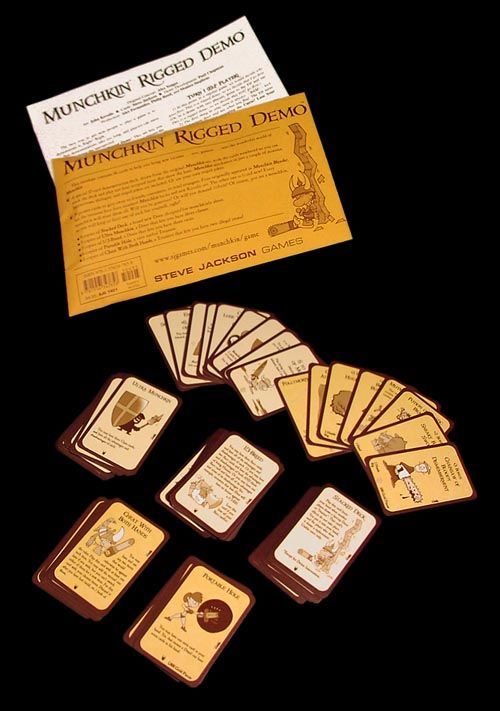 Publisher's Description This envelope contains 56 cards to help you bring new victims ... errr, gamers ... into the wonderful world of Munchkin ... A special 17-card demonstration deck, drawn from the original Munchkin set, with the cards numbered so you can stack the deck and play out four scripted turns that show the basic Munchkin mechanics in just a couple of minutes. Instructions, dialog, and stupid jokes are included. Or use your own stupid jokes. 39 promo cards to give away to friends, customers, or total strangers. Four originally appeared in Munchkin Blender, but the versions here have standard Munchkin backs and new Kovalic art. The other one is brand new! Every munchkin will want them all. Will you be generous? Or will you demand tribute? Of course, you are a munchkin, so you will keep at least one of each for yourself, right? 9 copies of Stacked Deck, a brand new Door designed for munchkinly abuse. 9 copies of Ultra Munchkin, a Door that lets you have three classes. 9 copies of 1/3-Breed, a Door that lets you have three races. 6 copies of Portable Hole, a very useful Treasure. 6 copies of Cheat With Both Hands, a Treasure that lets you have two illegal items! Other Part of the Munchkin series Limited edition: 5000 print run only. The rules for the demo game, including printable versions of the demo game cards, are available as a free download from e23, the digital content distributor for Steve Jackson Games. There is now an online Flash version of the demo.