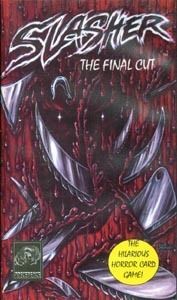 At the beginning of the game, it is unknown who the slasher is. The person whose turn it is plays a “scene” card. This may allow movement, may allow an attack, may be a clue to the slasher's identity. After the scene card is played, each player gets a chance to play a “plot twist” on the scene. In the course of the game, the first person to get three clues becomes the Slasher, and the dynamics change a bit. The game continues until either the Slasher is dead or all player victims are dead. Hilariously fun social game.