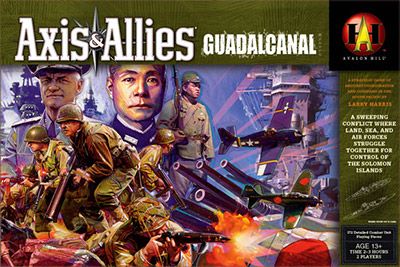 From Wizards website: A sweeping conflict in the South Pacific where naval might leads to air superiority. Axis and Allies: Guadalcanal challenges you to control sea zones and island groups while managing troop and supply transport and directing land, sea, and air forces in one of the decisive campaigns of the Second World War's Pacific Theater. Created by Larry Harris, designer of the Axis and Allies board game. Incorporates crucial elements that were key factors in the historical campaign, such as air strip construction, troop and supply transport, and furious land, sea, and air battles. Introduces the Cruiser unit as well as mechanics for land, sea and air combat in the South Pacific using a randomized casualties system. Provides fans with the historical counterpoint to the World War II experience offered by Axis and Allies: Battle of the Bulge. Note the following errata from the AH website: The rulebook states that players get 5 reinforcement points, plus 2 per island they control. This is incorrect due to an error in the rulebook. The correct reinforcement scheme is that each player gets 10 reinforcement, plus 4 per island they control. The game is playable either way, but Avalon Hill recommends playing the correct way (10 and 4 per). We are sorry for any inconvenience this causes.