Sherlock Holmes: A Game of Deduction and Suspense - Universal Statistics 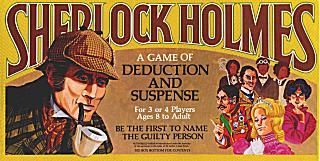 In Sherlock Holmes : A Game of Deduction and Suspense a diamond has been stolen and the detective Sherlock Holmes must discover who has done the crime. There is a single counter representing Sherlock Holmes and the players take turns moving it about the board. The game is played on the board and with a deck of cards. Each cards has a picture of one of the suspects on it and there are two cards for each suspect. At the start of the game one player shuffles the cards and places one face down in the middle of the board. The remaining cards are then dealt out to the players. Whenever a player lands on a picture of a suspect they must show any cards of that suspect. If they land on an "investigate" space they can examine a card from another player's hand. And, if they land on the "Scotland Yard" space then all players holding pairs of cards (two cards of the same suspect) must show them. Other spaces have special events on them which cause players to exchange hands and the like. Play continues until one player thinks they know who the culprit is. They announce their choice and check the card in the middle of the board. If they are correct they are the winner. Otherwise they are out of the game and play continues until someone makes the correct guess. Sherlock Holmes is a variant of the game Clue . The object is to figure out which card is in the middle of the board. Since there will be two cards for every suspect in the player's hands except for this one the idea is to figure out which card doesn't have a match in another hand. This game was authorized by the Sir. Arthur Conan Doyle estate.