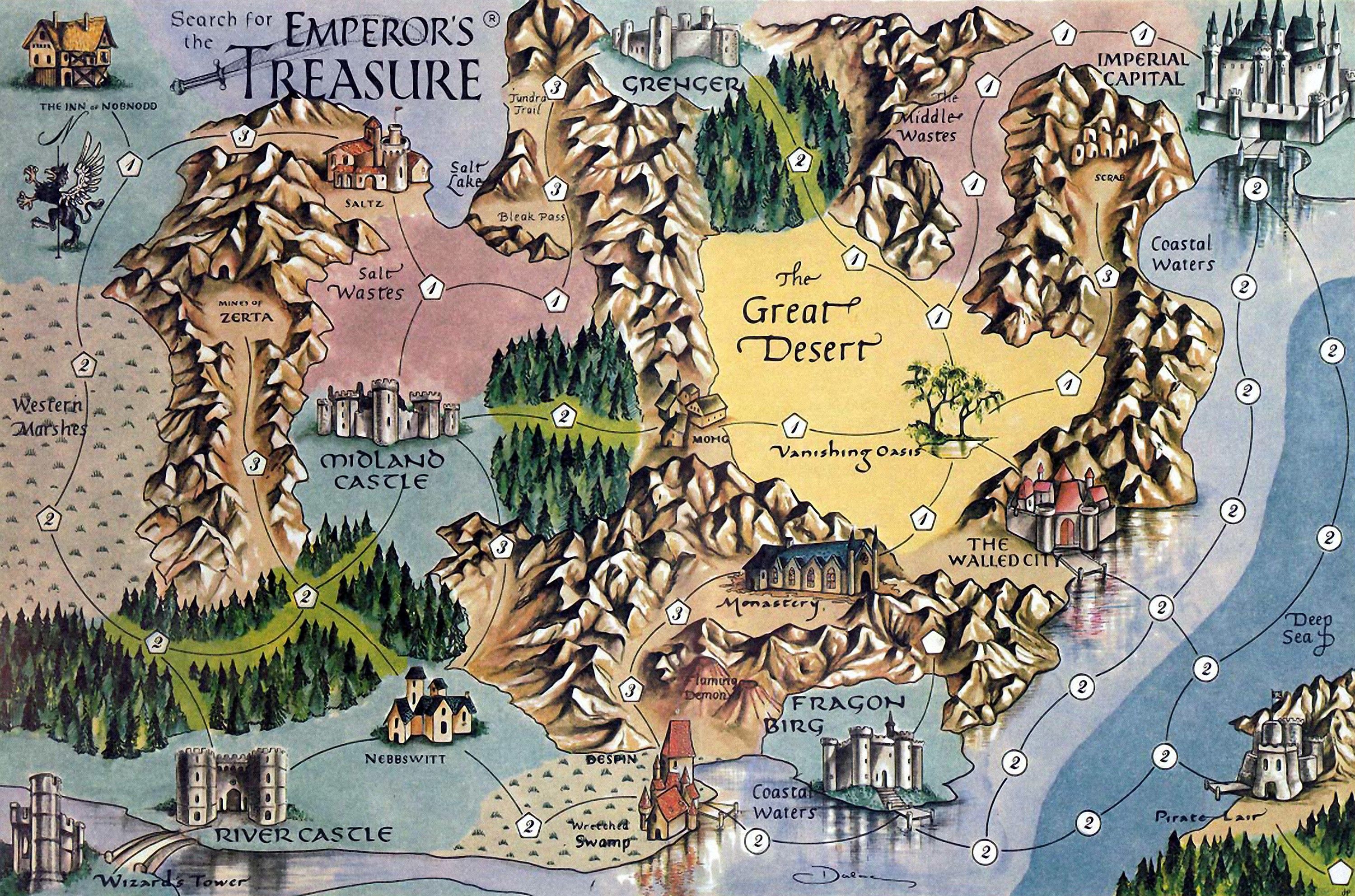 Originally published in issue #51 (July 1981) of Dragon Magazine. Republished as part of the The Best of Dragon Magazine Games boxed set in 1990. A tongue-in-cheek version of "classic" Dungeons & Dragons (some even say Mertwig's Maze is a similar treatment of Advanced D&D). As such, players become a warrior, elf, cleric, or magician, then wander around the board collecting treasure and resolving encounters. The Emperor's six magic artifacts are both high-powered magic items and a countdown clock, as when enough have been found, the game ends. (Exactly how many depends on number of players.) Treasure, encounters and equipment are all randomized with chits in three cups. Characters obtain them by fighting monsters or lucky die rolls on result charts associated with various board locations (e.g., castles, villages, The Wizard's Tower, The Pirate Lair, etc.). Not all encounters are monsters -- some are travelers who will bestow treasure upon completion of quests, others are annoyances, and there's even Imperial Guard patrols looking to confiscate the Emperor's Treasure. Terrain types are a key strategy feature, as a player whose current location's terrain doesn't match the encounter drawn can bestow it on someone else who does. So a character in rugged forest or mountains can get stuck fighting several monsters in succession during other players' turns. A surprising amount of flavor is included for a magazine game. There's an assortment of magic spells, ranged and close combat, magical weapons & armor, damsels in distress, evil wizards, a volcanic demon, even a wandering elephant. The boxed version changes the encounter mix around, adds a deck of treasure clue cards, and expands the character selection with a dwarf and a "hairfoot." Counters are die-cut, but monochrome rather than full color. The nice Darlene Pekul map painting is traded in for a hexmap with generic terrain symbols that Wham suggests you mount to cardboard and cut apart, thus creating a new map each game a la Kings & Things. The cards force characters to move a lot more, and most encounters can no longer be given away, so this edition plays quite differently.