Hounds and Jackals: Game of the Pharaohs - Universal Statistics 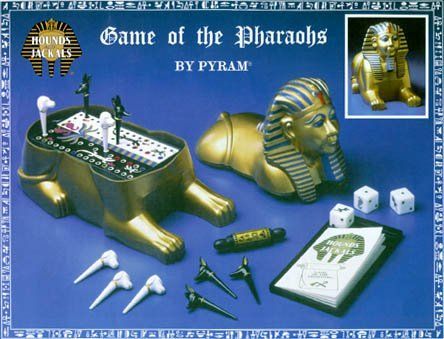 The Ancient Egyptian game known to us as "Hounds & Jackals" has finally been produced by a modern game company. The components are very nice looking, making the game worthwhile despite its rather low ludical (??? what word should be here instead of ludical!!) quality --it was the Ancient Egyptian equivalent of Snakes & Ladders. (It appeared fairly late in Egyptian history, during the New Kingdom) In a nutshell, each player races his team of pieces (hound- and jackal-headed sticks, respectively) on his side of the race track, which includes a couple of ladder/snake shortcuts. The rules are archaeologists' best guess. Since each player races on a separate track, there is apparently no direct player interaction. But I've been mulling over the idea of having a player's special spaces affect the other player's pieces --just to get some direct interaction.