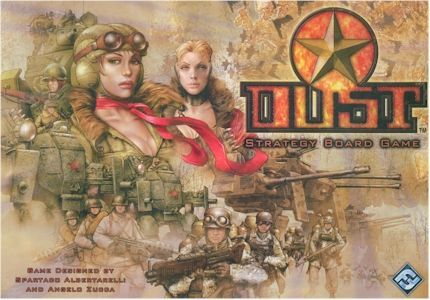 Dust is a strategy board game of conquest and control. Seize power sources and capitals, develop your infrastructure, and build and wield vast, high-tech armies in your bid for global domination. Players will probably recognize the map as that of Earth, but what they will not see are any borders or nations. In the world of Dust, the unending war and the new technologies have altered the political face of Earth beyond all recognition. At the beginning of each turn, players select a card from their hand. This card represents their strategy for the coming turn and to a large extent dictates the actions a player can take. During their production phase, players spend production points to buy additional factories and units. Each individual unit type has its own unique statistics and effects, so players have to carefully consider the composition of their armies. In combat, players alternate rolling dice and destroying units until one side has been eliminated (either due to casualties or retreats) or a cease-fire is declared. At the end of each game round, players score victory points for power sources, capitals, and majorities they control. The player who controls the most land areas earns bonus victory points, as does the player who controls the most sea areas and the player who controls the most production centers. The first player to amass a set number of victory points while also controlling a capital is the winner. Only once a player has amassed at least half the victory points required to win can he or she attack an enemy capital. Once the war has been so escalated, however, then all players are free to attack capitals. Dust English Rules Premium Version http://www.fantasyflightgames.com/ffg_content/Dust/Dust_Rulebook_Prem_Eng.pdf Dust English Rules Epic Version http://www.fantasyflightgames.com/ffg_content/Dust/Dust_Rulebook_Epic_Enig.pdf Backstage http://www.kaleidosgames.com