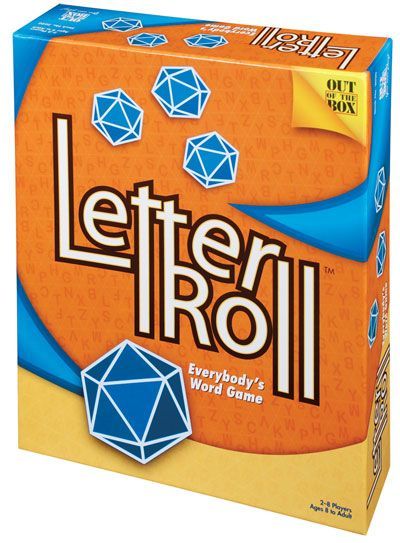 Roll the special Letter Roll dice and flip over the timer. Players race to list words containing the three letters shown on the dice. Only words listed by a single player score points, so players are rewarded for both their speed and creative thinking. Components Seven polyhedral dice (20-sided?). The color of the dice indicate how frequently their letters appear in English: 2 white dice – frequently used letters 3 blue dice – less frequently used letters 2 orange dice – infrequently used letters 1 two-Minute timer for the standard game 1 one-Minute Timer for the fast-play game Four pads and four pencils Gameplay Decide whether to use the short or long timer. One player chooses 4 of the 7 dice and rolls them. The player to their left removes a die of their choice. Players then write down all words they can think of which contain the remaining 3 letters and any number of other letters. When time is up, word lists are read and you must cross out any word which someone else has used. Your remaining unique words are your points. All 7 dice are then passed to the next player and the process is repeated. Each person rolls 1 to 3 times, depending on the number of players, at which point whoever has the most points wins. For younger players use fewer and easier dice; for expert players use 4 dice instead of 3 and set a limit on the minimum number of letters that a word must contain. Note: before starting, players may want to decide whether to change the rule that allows repeating the same root word. For example, if played as written, cheat, cheats, cheated, cheating, cheater are all allowed.