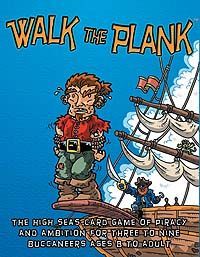 Walk the Plank is a fast-moving card game for three to nine players, ages eight and up. The object is to win the most battles in any given round to become Captain for the next round. But be careful – if you don’t win ANY battles in a round, you’re out of the game. You’re dealt fewer cards in each successive round, and the player who wins the final round wins the game! Play is fast and furious, with an average game time of only 10 minutes. Walk the Plank comes with a deck of 68 cards. The deck has sixty-five numbered cards, two Walk the Plank! cards, and one Sea Monster! card. The sixty-five numbered cards are divided into five suits: Doubloons, Hookhands, Monkeys, Parrots, and Peglegs. The cards in each suit are numbered 1 through 13, with 1 worth the least and 13 worth the most. The first dealer, or Captain, deals 7 cards to each player in the first round of seven. Subsequent rounds deal one less card. (Round 2 is 6 cards, Round 3 is 5 cards, etc.) The Captain then turns over the top card on the deck so that everyone may see it. The suit of the card revealed will be trump for the first round. The trump suit is the most powerful suit in any given battle. For example, if Monkeys are trump, then a low card in Monkeys will beat even a higher-numbered card in any other suit. If the card the Captain turns over is a Walk the Plank! or a Sea Monster!, there is no trump suit for this first round. In every round after the first, whoever is Captain chooses the trump suit after looking at his or her cards. The suit of the first card played in a battle is called the current suit. If this card is a numbered card, it may or may not be from the trump suit. If the first card played in a battle is one of the three special cards, there is no current suit for that battle, but each player still has to play one card. You must play a card of the same suit as the first card played in each battle, if you can. We call this following suit. So if you have any cards in your hand of the same suit as the first one played in a battle, you have to pick one and play it. You don’t have to follow suit if you have no cards in the current suit. You don’t have to follow suit if you have a special card (Walk the Plank! or Sea Monster!), unless you choose not to play the special card. Walk the Plank! will win any battle, beating even the highest card in the trump suit—think of it as a “wild card” worth one more than the highest card in play. When someone plays Sea Monster!, no one wins the battle, no matter what cards have been played. The player who played Sea Monster! doesn't win the battle, but he/she does gain control. (So he/she gets to choose the current suit for the next battle by playing the first card.) The player who wins the battle in the round becomes the Captain in the next round, which means you get to play the first card in the next battle. If you win one or more battles in a round in which no other player wins a battle, you win the game!