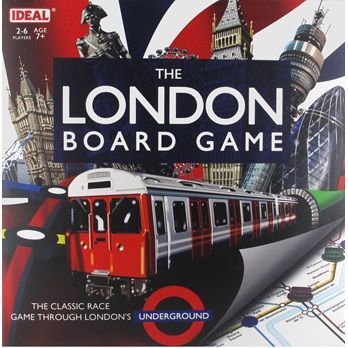 The London Game has a board showing the centre of the innovative map of the London Underground, updated over the years as the game was re-issued and the Tube developed. Starting at a mainline terminus, players must travel the network, visiting 6 tourist locations on Souvenir cards dealt from a deck of 30, stopping at the relevant Tube station and finally returning to their starting point. You move from station to station on the roll of the die, but to change lines you must stop at junctions and draw a Hazard card. This may move you or other players around the board. You may also close stations with a token when you leave, to block other players. The later editions have 36 full colour cards and some changes in the locations, but nobody bothered rewriting the rules text at all in 20 years! Sibling: The Boston Game Sibling: The New York Game