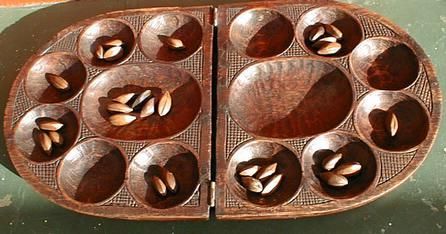 Oware is one of the most played games in the Kalah Family of pit and pebbles games. It is the National game of Ghana and the word "oware" means "He She Marries". The mythology behind the name is believed by many to be the result of a wedding between a man and a woman and the dowry (represented by fields (pits) and seeds. Basically, you're playing for fruitful paddocks. The game as played in Ghana is a social event and is commonly played on the street. Heckling, banging the fist and mocking are all allowed. The game is also used in education among the Asanti children for the development of maths skills. Most of the oware available in Ghana is hand carved and comes with traditional symbols of the Asanti people carved into the wood. The traditional playing seeds are Bonduc seeds, a bright green seed with a hard shell. Stones and sometimes recycled glass are used. As for the other games in the Mancala Family, the rules differ from country to country; however, for Oware there is an international organization which sets the standard. The basic object of the game is to capture more seeds than your opponent. This is done by landing the last seed you are "sowing" in a pit on the opponent's side which contains one or two seeds. Other rules allow multiple captures and the avoidance of "stalemates".