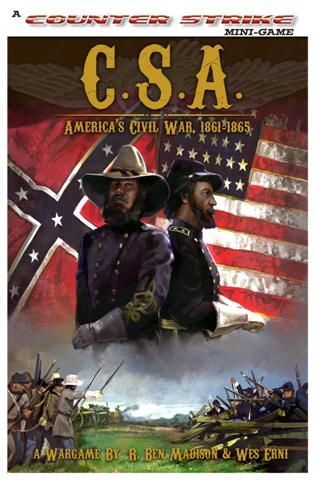 C.S.A. is a simulation game of the American Civil war. The USA player controls the Union side and the CSA player controls the Confederate side. The Game contains the rulebook, 288 counters, one color map and 10 sheets of charts and tables. The game uses Ben Madison and Wes Erni's "Charles S. Roberts Award" winning Death in the Trenches: The Great War, 1914-1918 system to simulate the American Civil War. Units represent Generals (their component brigades are represented off-map), elite units (Iron Brigade, Cobb's Legion), cavalry (Stuart, Stoneman), guerillas (Quantrill, Kirk), and Indians (Choctaws, Delawares, Stand Watie). Like Death in the Trenches: The Great War, 1914-1918 random events and "Special Event Coins" are crucial, and there are about 400 (yes, 400) of them. Forming stacks into 'Grand Armies' (e.g. Army of the Potomac, Army of Northern Virginia) enables the various commanders in the stack to coordinate their fighting powers. Cavalry have special abilities but also a habit of running away when you need them. Guerillas ravage the countryside (Quantrill, Price, Morgan -- and the less widely known Union barbarian, George Kirk). Generals do not always follow orders to move, and sometimes must be prodded by expending irreplaceable command chits. Special rules cover foreign intervention, the border states, as well as McClellan, Lee, Jackson and a few other characters. Naval warfare (Confederate commerce raiding) is handled by an extremely simple, elegant abstract model complete with a world map. The game is won by either capturing the government marker of either player or destroying his economy. Capturing cities and winning naval battles increases the enemy's inflation rate, which affects a lot of elements like national elections (there are three over the course of the game--one in the Confederacy!) and reinforcement rates.