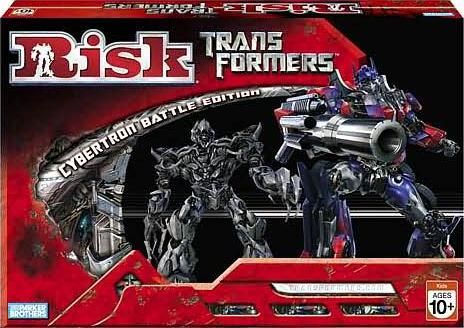 The game of Global Domination takes a twist with this version set on Cybertron and based on the Transformers movie. Fight to gain control of the world on the side of the Autobots or the Decepticons! Choose your side, then play by either classic Risk rules or the Transformers variations! The game was released in two editions: "Cybertron Battle Edition" and "Cybertron war edition". Components: gameboard 42 upgrade cards 4 reference cards 4 leader cards 5 sic-sided dice 5 eight-sided dice 4 sets of armies each with 15 tanks and 35 transformers 4 leaders 2 cardboard spinning zones 2 cardboard sliding zones, 6 plastic pegs