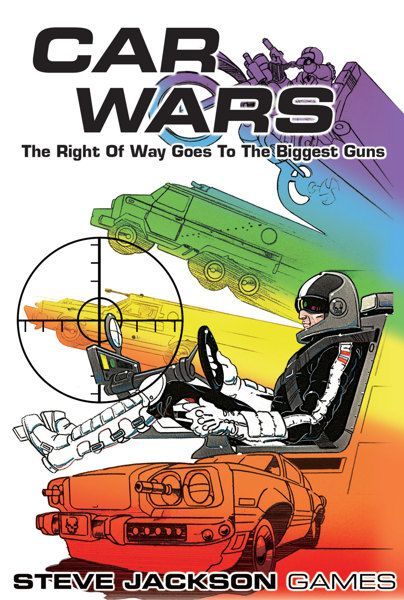 Drive Offensively! Car Wars is a game featuring freeways of the future in which the right of way goes to those with the biggest guns. Players choose their vehicle — complete with weapons, armor, power plants, suspension, and even body style — then they take them out on the road, either to come home as "aces", or to crash and burn. If a driver survives, his abilities improve and he can earn money to buy bigger and better cars. Advanced rules let players design their own customized cars, trucks, and cycles. This entry covers Car Wars and Car Wars Deluxe, the first two editions of the rules. See also: Car Wars Compendium, a.k.a. CWC and CWCII, for the third and fourth editions of the rules Car Wars (Fifth Edition) for the revised and simplified edition of the game Mini Car Wars, an introductory version of Car Wars originally printed on a single sheet of paper, requiring only a pencil and six-sided dice. Car Wars Series for a complete list of expansions and supplements (including Autoduel Quarterly, the forty-issue Car Wars magazine)