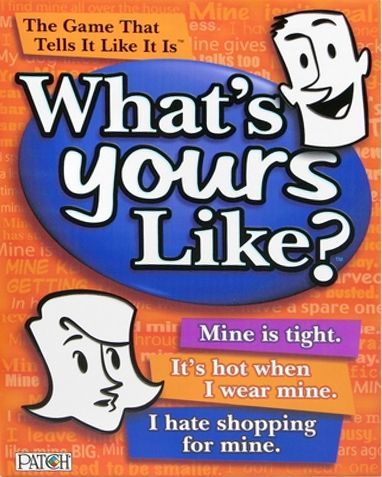 From the Press Release: What's Yours Like?™ is the new party game from Patch Products where players share side-splitting laughs while coming up with clever, witty and outrageous clues. Descriptions should be truthful, yet clever, so the player in the hot seat doesn't get an easy guess. In this game, all players except the one in the hot seat look at a guess word and then creatively describe what theirs is like. They might be telling about their swimsuit, neighbor, closet, hair or any of the other 300-plus words in the game. The player in the hot seat then tries to link all the clues together to figure out what is being described. The best part about this game is that the hilarious clues come from people who play the game. The player who guesses his or her word with the fewest number of clues wins. What do you think players are describing with these clues? Mine keeps getting bigger. I compare mine with others. My wife likes mine. I never see mine. I receive mine once a month. You wouldn't believe what I do for mine. Mine disappears too fast. What's Yours Like? is for 4 or more players ages 10 to adult.